it was hot, crowded, and housed significantly fewer pigeons and rats than advertised: New York City.

WHERE WE STAYED: Fairfield Inn & Suites World Trade Center
while planning our trip, I had only one must-see: the 9/11 Museum and Memorial. I’d just heard an episode of This American Life about a man named Steve Kandell making his way through the museum years after his sister had died during the 9/11 attacks, called “Exit Through The Gift Shop.” he describes the museum ripping him apart and making him whole again. it was a fascinating and devastating story that I couldn’t stop thinking about, and felt compelled to go myself.
based on this one single must-see, I booked the cheapest-while-still-acceptable hotel I could find nearby. it ended up being incredibly convenient — close to the subway, easy for taxi drivers to navigate, and close to exactly what I wanted to see.

NIGHT 1: Pastrami & Milk Bar
after a long and nauseous day of flying, I was so grateful to meet up with Austin and one of my very best friends, Eunice, who happened to be in town for a work trip. she had been to Manhattan several times before, so she suggested East Village for a quick dinner of pastrami sandwiches and then the actual main course, Milk Bar. I had just watched the episode of Chef’s Table about Milk Bar and its, Christina Tosi, a few weeks prior, and was dying to taste what I’d seen! Austin ordered the Birthday Cake Truffle Milkshake, I got the Cereal Milk Soft-Serve with Flakes, a Crack Pie Bar, and I forget what Eunice got because I didn’t get to try it.

DAY 2: Ferry Ride & Walking Forever & Top of the Rock
after sleeping in for a long time, Austin and I headed to the nearby Le District, got a couple of crepes to go, and ate them on the water in Battery Park. 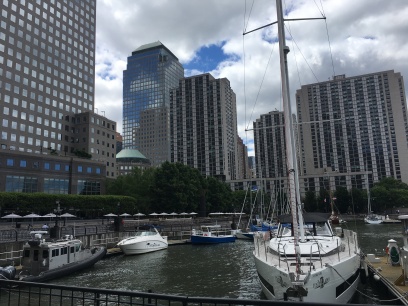 rich people’s boats
we hopped on an hour-long ferry ride that went past the Statue of Liberty and dropped us off near Times Square (the whole ride is round-trip and two hours long). tickets were about $35 each. 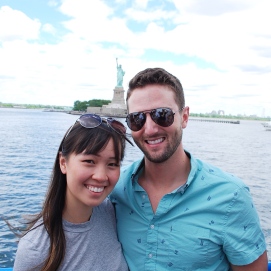 still feeling a little nauseous from my flight, I got just slightly queasy on the boat ride. there were plenty of places to sit and there was a good breeze, though, so it never got to the point of full-on seasickness. the views were amazing!
after we got off the boat, Austin and I walked for what felt like forever (my watch later told me it was a total of 26,000 steps that day). we walked through Times Square, which was showing the World Cup on the jumbo screen. it was so neat to see people from all over the world gathered together to watch the soccer/football game.

never going to cut my hair

Austin and I met up with Euni for one more lunch (thank you again for paying with your company card, bb) before her flight. we grabbed some pizza, pasta, and beer at Angelo’s Coal Oven Pizzeria before walking Eunice back to her hotel. we took the subway back to our hotel to grab a nap (I was constantly le tired on this trip). by the time we ventured out again, it was pretty late. Austin wanted to see the top of the Rockefeller Center, so we snagged some tickets for 10:15 p.m. for Top of the Rock. it was a long wait to get through security and all the way up to the top (maybe an hour?) but the views were worth it.

we ended the night at a nearby bar called O’hara’s just blocks from our hotel, which seemed to be super popular among cops, firefighters, and other first responders. our waiter was super friendly and the food was good. the walls were covered in police and fire badges — and we happened to find a badge from Tulsa Police Department!

DAY 2: Alexander Hamilton is dead & Fearless Girl & the Brooklyn Bridge & The Met & I got sick 😦
another benefit of our hotel’s location, unbeknownst to us when we booked it, was that it was literally one block away from the historic Trinity Church. being the idiot tourists we were, though, we didn’t know how famous the church was — we just saw people milling around in its cemetery like weirdos, so we decided to check it out for ourselves. 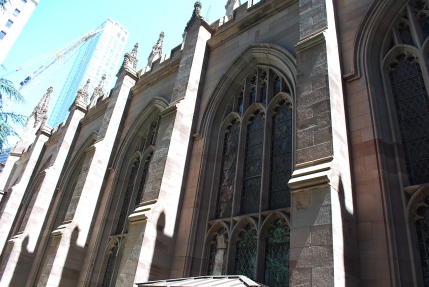 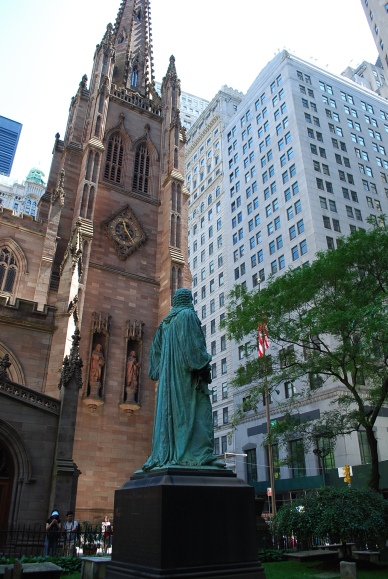 we were there for about half an hour, reading out loud the fascinatingly short lives of the people buried in this graveyard that was built IN THE 1660s… BEFORE WE REALIZED ALEXANDER HAMILTON WAS BURIED HERE.

we were totally shocked and felt like morons that we’d missed this fact. this church is beautiful and the cemetery and churchyard are free, so i highly recommend seeing it. the surprise of it all actually made it even better.

from Trinity Church, we made our way to Wall Street, also just a few blocks from our hotel. the street was closed down because it was Saturday, except for a few cafes. we grabbed a quick sandwich and juices from Joe & The Juice.
we spent a long time looking for the Fearless Girl statue before we finally asked a security guard, who kindly gave us directions. actually, one of our biggest takeaways from our short trip was that most people in Manhattan, especially in the service sector, are actually super nice.
we finally found the Charging Bull statue, which was SURROUNDED by tourists from all over the world (many of whom grabbed its peen, smdh), but virtually no one was taking photos of the Fearless Girl. I obviously did. and I fed her, too.

by that time, we really needed to pee, and being that it was Manhattan, we were screwed. there are virtually NO public restrooms in this freaking city — not even at stores at which you JUST BOUGHT SOMETHING — so your best bet is to go at a restaurant where you spent money, or, if you’re lucky, at a free museum that you come across.
aka Austin and I visited the National Museum of the American Indian: “Come for the bathrooms, stay for the guilt.” it was actually a lovely building with interesting exhibits. Austin and I had fun looking for costumes and artifacts from the Cherokee Nation, of which Austin is a member. 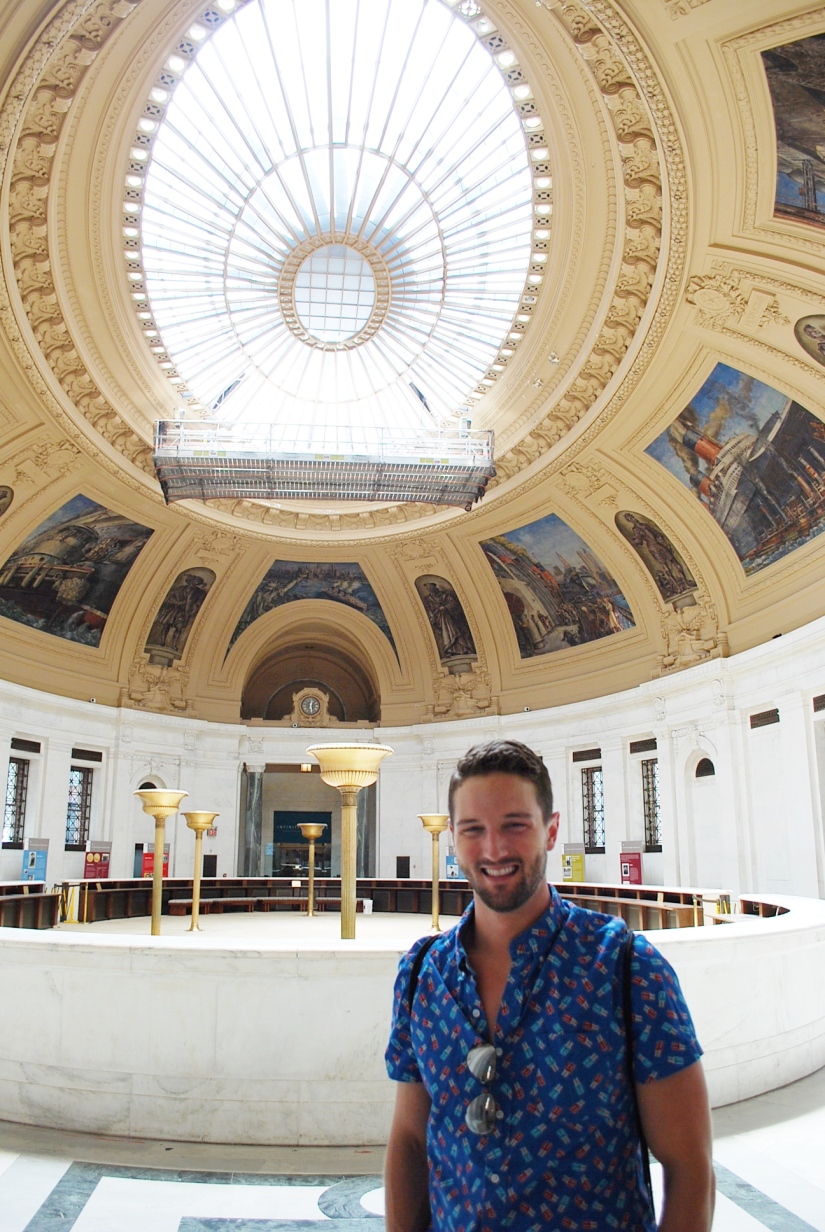 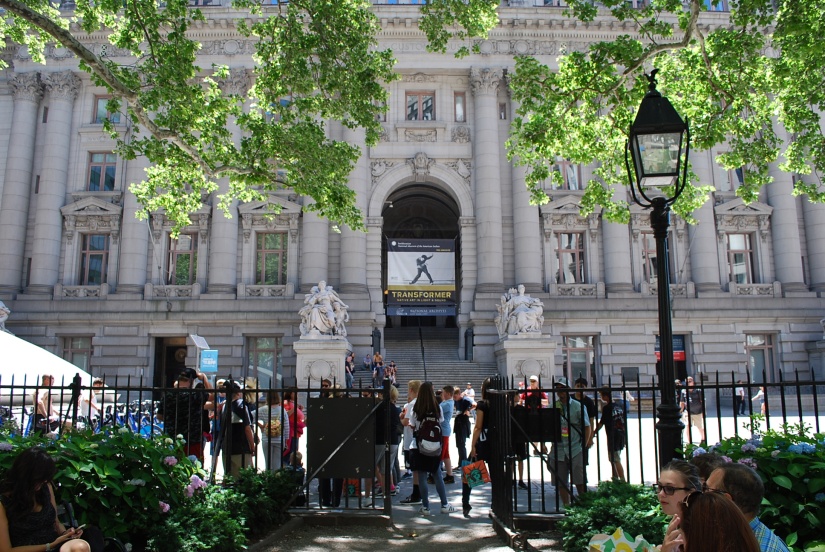 we still had super sore feet from the day before, so we then naturally decided to walk the length of the Brooklyn Bridge. it was HOT and super sunny, so the walk wasn’t much fun (plus there were several joggers — why would you run on one of the busiest, most crowded pedestrian bridges in the city? sincere question), but the views were awesome. there were so many people I couldn’t have a fashion blogger moment, but we managed to get a few pictures on our walk all the way to Brooklyn. 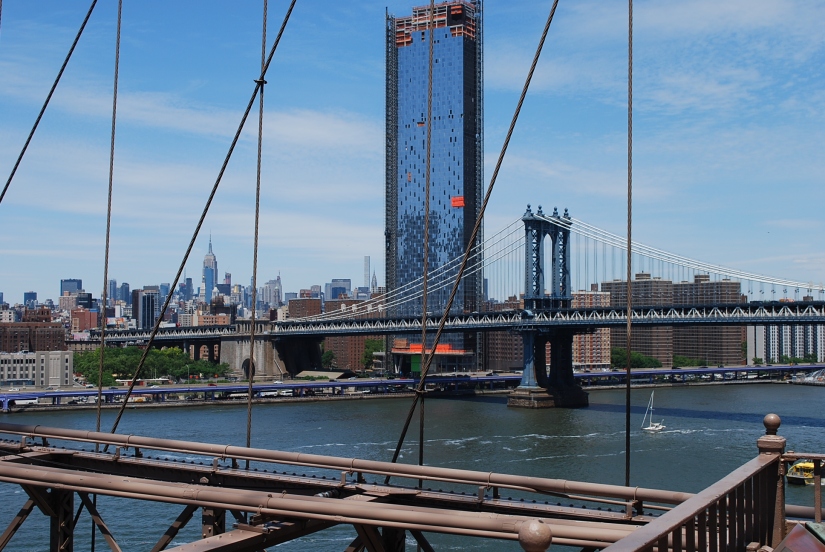 we went back to our hotel for another nap (lol), and then Austin asked me to choose our next outing. I picked the Met because #Rihanna. and, if we’re being completely honest, the exhibits were fine. I would compare it to the Louvre — a lot of historical artifacts and statues. 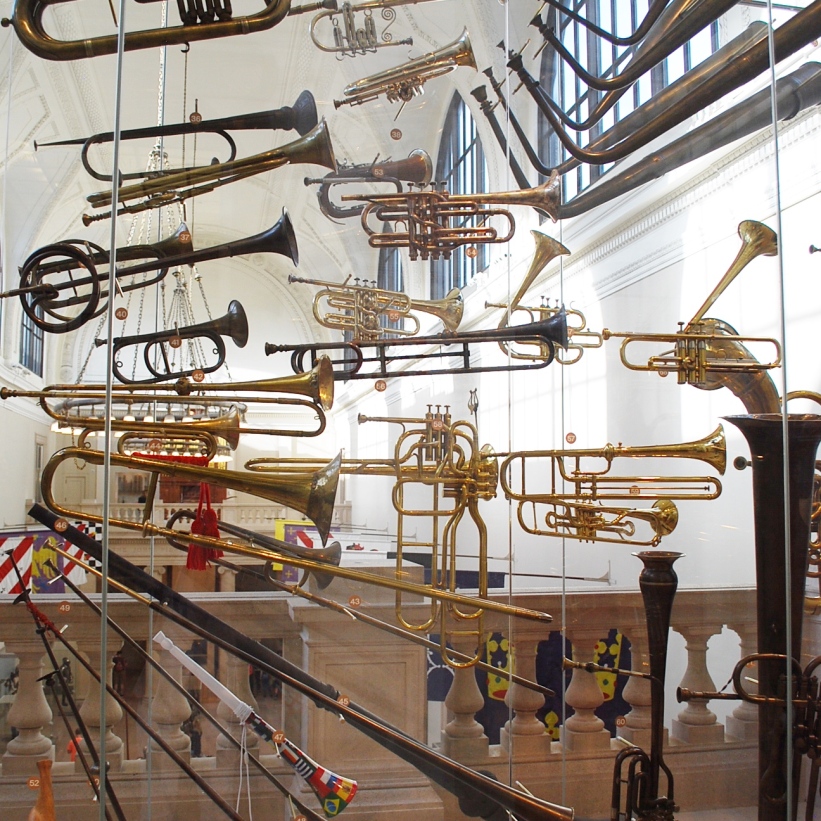 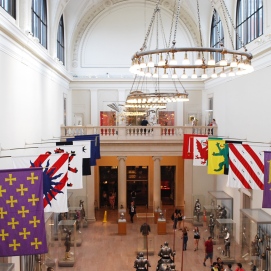 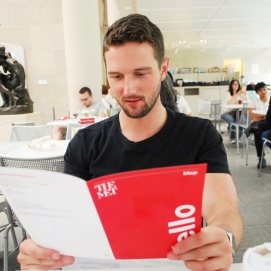 but then — then we heard some creepy-ass music and started walking toward it. it was the HEAVENLY BODIES EXHIBIT! “Fashion and the Catholic Imagination.” it was just as magical as it sounds, a really cool and eerie mix of Catholicism’s history with couture; dark but glittery, very creepy-cool. it was unlike anything else in the museum, quite edgy and v goth. I must have walked around it five times!

at this point, I was full-on nauseous, so we cabbed back to our hotel (which made me almost ralph in the car) and I had to bail on dinner with our sweet friends Jacob and Tara (I’m sorry, guys!) while Austin met up with them. I think I Grubhubbed some Thai food and fell asleep with a bowl of soup on my nightstand.

DAY 3: The 9/11 Museum & Dramamine
it was the one thing I most wanted to see in New York but I couldn’t bring myself to do it until our last day — I think I knew it would bum us out, and I didn’t want to be sad early on in our trip. before our afternoon flight, Austin and I finally went to see the 9/11 Museum.
even if you don’t plan on seeing the museum (which you should), at least make your way to see and walk around the Memorial. it’s beautiful, pensive, and inspiring.

once inside the Museum, there’s a lot of security to go through. super-strict security. it made sense to me, but Austin felt like the security officers were rude and it kind of ruined the mood as we entered the Museum. I forgot about it as soon as we got past it. there’s no certain direction you have to go within the Museum; it is split up into different sections that are in no particular order.

I won’t go into melodramatics, but I will say that I am so glad we went to the Museum. it helped put the event and the scope of the damage into perspective, since my generation was pretty young when it happened — I realized just how brave the first responders were and just how extensive the destruction was. heavy, but more than worth it. 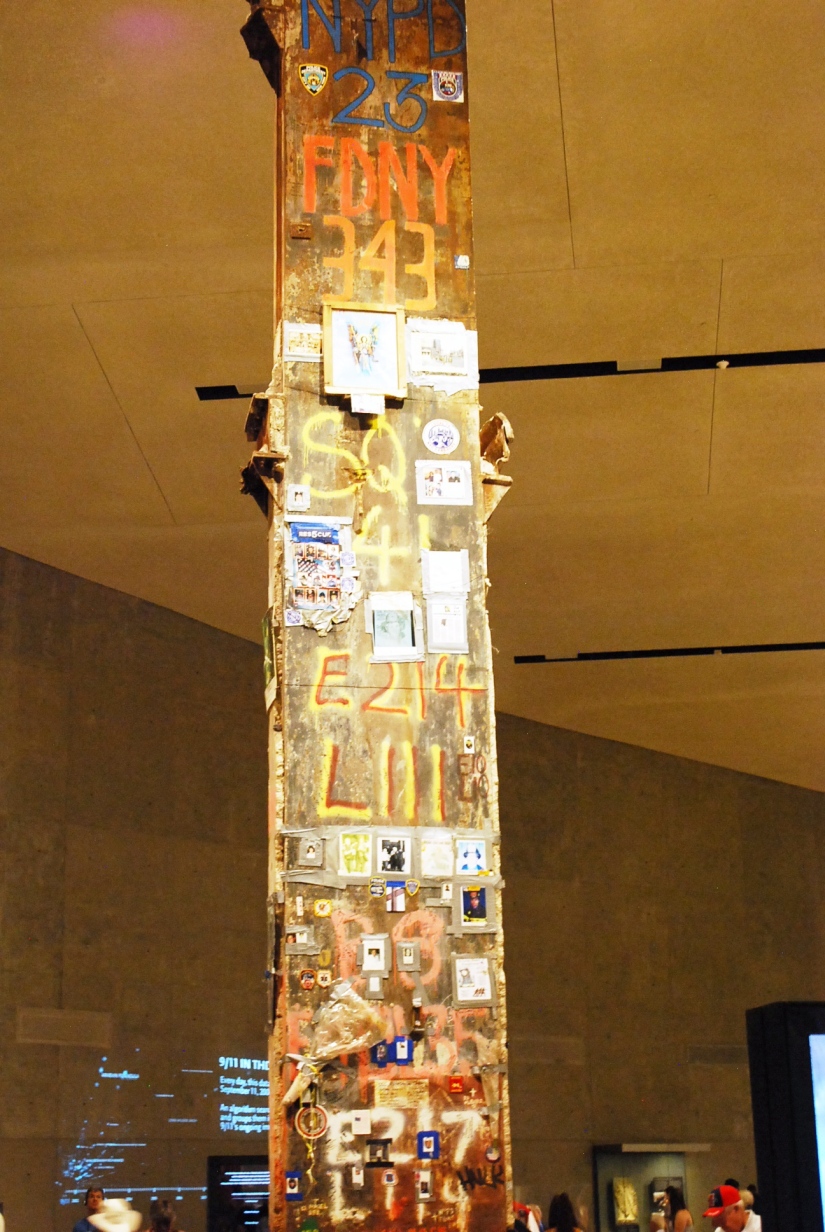 of course, as soon as I landed in Tulsa, my nausea was gone. go figure.